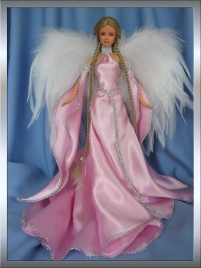 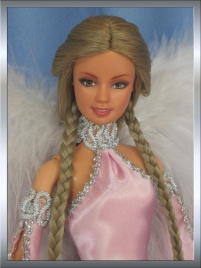 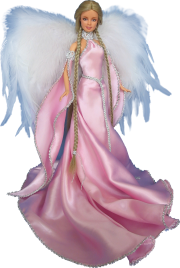 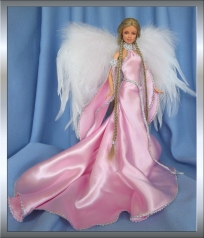 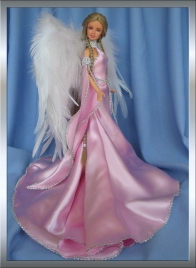 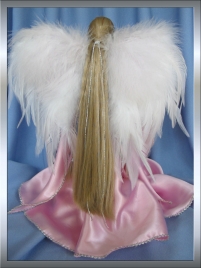 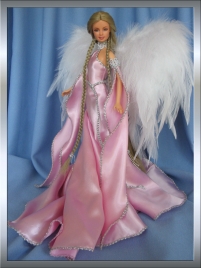 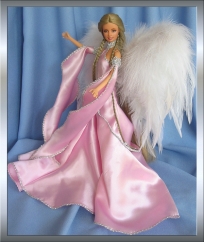 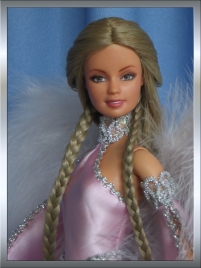 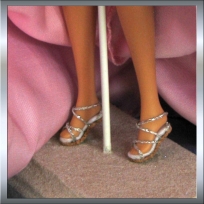 While you are waiting for Winnie’s pictures to load, here is the story of how she came about.

“Winnie” started out as a “My ballerina Terresa” and she was one of those girls that really make me wonder about my level of sanity. You’ll see why…. 😉

This girl told me that she didn’t like her brown hair nor did she like the body Mattel had given her. Instead she wanted golden blonde hair that would reach the floor… and a belly button. I don’t think she was impressed with the hard blue plastic legs she originally had. Do you see why I questioned my sanity?

While I was “plugging” away on her new head of hair… she’s saying to me “I want a pretty pink dress… with a long full skirt. It has to be shiny too, like satin! Oh, and I want soft brown eyes that are highlighted in such a way that they almost reflect the pink in my gown.”

So after hours and hours and a zillion knotted plugs later… this girl had very long golden blonde hair. It’s beautiful, and I must say it looks very good on her. She then got put away until I had the time to work on her again.

While I was surfing around at deviantArt looking at the various contests they had going, my attention was grabbed by this one…. Think Pink III. Yup you guessed, I heard her voice again telling me that she wanted to be entered into it. So I took her back out, and started working on that pink gown she was so insistant that she get. When I was almost done with the gown, did she stay quiet? NOOOooooo…. now she is telling me that she wants wings. Big, white & feathery. She wants to be an angel.

I just couldn’t get her voice out of my head… so off to the fly tying store I go and I bought all the white feathers he had, and started working on these wings as soon as I got home. By that evening, she had her wings. A few days later she had all her original face paint removed, and replaced with the requested brown eyes, and soft natural looking pink lips.

The last thing she told me was that she wanted to be named Winnifred (Winnie for short), after my aunt who we lost a few years ago. My Aunt Winnie was a breast cancer survivor, and had always been an inspiration to me. It just seemed fitting for this girl to be named after her.

Now that she is done, her voice has stopped… but I’m hearing others calling. Other girls who want to be angels for other awareness causes. I think I need help 😉

Would you like to be notified when I have a doll available & receive exclusive members only discounts?
Then I invite you to subscribe to my "First to know Newsletter".
It's spam free, completely confidential & you can unsubscribe at any time.
Subscribe to Reflections by Ice's First to know List
Unsubscribe